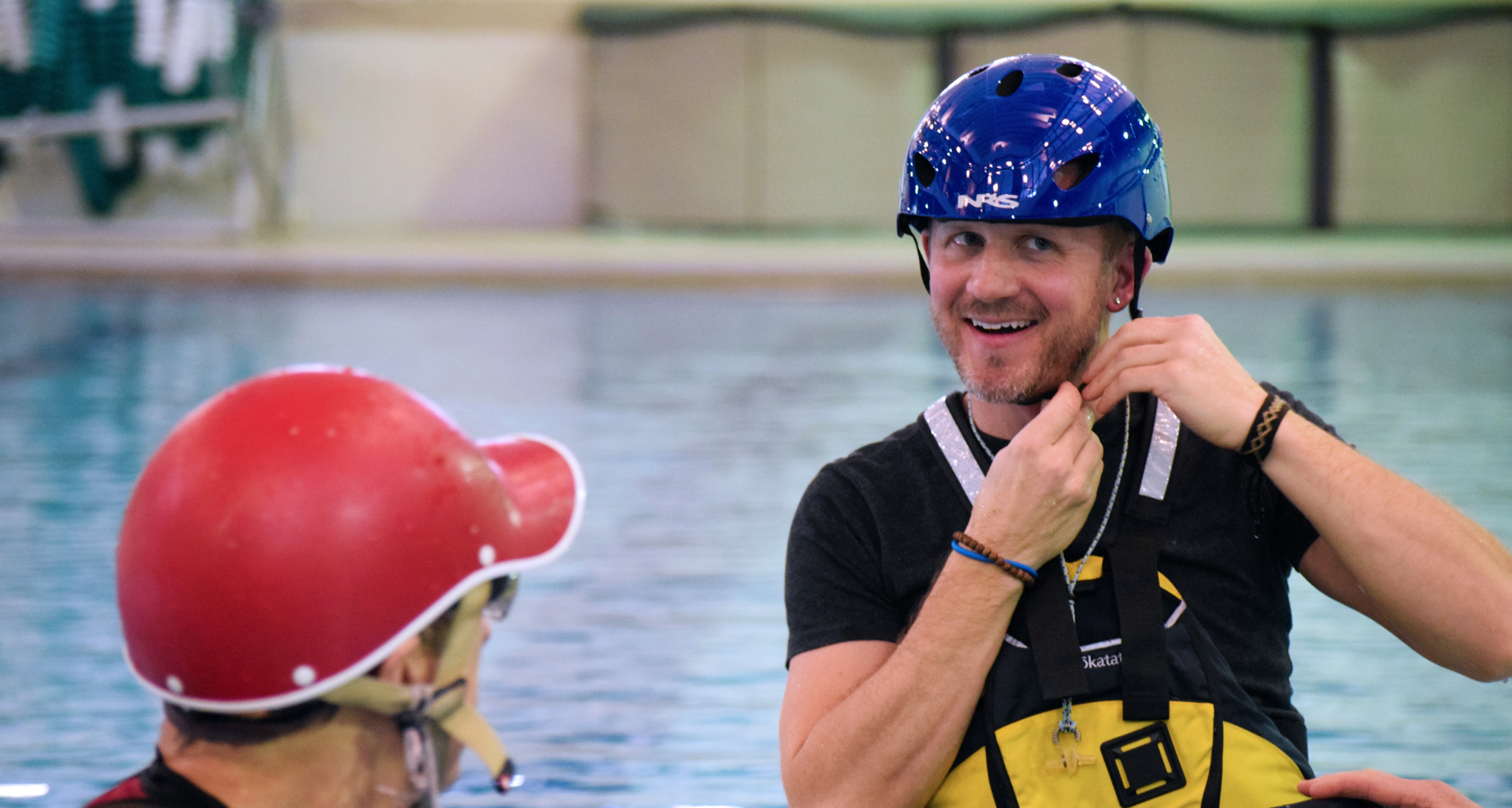 On a Friday afternoon in January, a group of veterans stand beside an indoor pool in Edina. Two of them have traumatic brain injuries. The third is an amputee. Nonetheless, they’re here to kayak.

A group of instructors explain the basics: how to get inside a kayak, the proper way to paddle, and what to do if the kayak capsizes.

One of the kayakers is 44-year-old Erik Holmgren, a Desert Storm vet whose left leg is amputated below the knee. Clad in a black t-shirt and shorts, Holmgren slides into a blue kayak on the pool deck. Then he bends at the waist to remove his prosthetic leg.

Bill Kabitz, Holmgren’s instructor, places the leg on a bench for safe keeping, then hands Holmgren a partially deflated beach ball. The veteran wedges it between his left knee and the bottom of his kayak for stability. Then Kabitz pushes Holmgren and his kayak into the pool.

The veterans are patients at the Minneapolis VA, and the kayak program is a VA collaboration with three entities. Edinborough Park, in Edina, lets the VA use its pool during the fall and winter months. The Minneapolis chapter of Team River Runner (TRR-Mpls), a nonprofit that offers adaptive paddling programs to veterans and their families, provides instructors, kayaks, and other equipment. Three Rivers Park District, a park and trail system in the west suburban Twin Cities, assists TRR-Mpls with the fall and winter pool sessions, allows the VA to use its kayak fleet, and takes participants paddling on local lakes and rivers during the spring and summer. (Three Rivers also has its own adaptive sports program with offerings like Nordic skiing, mountain biking, and paddle boarding. The program is open to disabled veterans and non-veterans alike.)

We’ve never met a veteran who we could not get into a kayak.

Moments later, Holmgren is joined in the pool by Robyn Alexander, a middle-aged vet. In 1985, while stationed at Edwards Air Force Base, Robyn was struck by a truck while driving her car. The incident left her with a traumatic brain injury and sometimes Robyn can’t remember instructors’ names or that she’s been kayaking before. Yet today she paddles in robust circles around the pool.

Another veteran, 33-year-old Justin, stands at the edge of the water in a white t-shirt, holding a kayak paddle and looking apprehensive. A former Infantry gunner, Justin was diagnosed with a traumatic brain injury after he was electrocuted by faulty equipment in Iraq. “Trying new things takes time for me,” Justin says, and he ultimately opts out of kayaking, citing “a case of nerves.” Yet nobody judges him, and he’s soon laughing with a group of volunteers. Justin says that even though “something wasn’t clicking today,” the nonjudgmental environment has convinced him to give kayaking another go. “If you don’t try something new, you stagnate,” he explains.

The kayaking program is one of many recreational programs offered by the Minneapolis VA. According to Kristin Powell, the VA’s Polytrauma Outpatient TBI Recreation Therapist, these programs are an “integral step along a veteran’s rehab journey” — a step that improves quality of life now, and in the long-term. “If you develop habits you enjoy, you’ll sustain them in the future,” Powell explains. The programs also bridge veterans back into the community.

TRR-Mpls and Three Rivers Parks can provide veterans with experience in three styles of kayaking -- sea, recreational, and whitewater. Depending on the style, the kayaks range in length from six to 18 feet. Whitewater kayaking, in particular, remains a popular option among vets, and TRR-Mpls instructor Brian Jensen -- who’s been in the armed services for 24 years -- thinks it’s because of its similarity to the military experience.

“Whitewater kayaking is an adrenaline sport, and you have to work as a team to ensure the safety of all. This teamwork builds trust and strong comradery,” Jensen says. 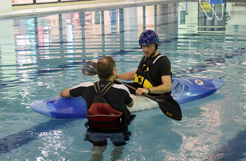 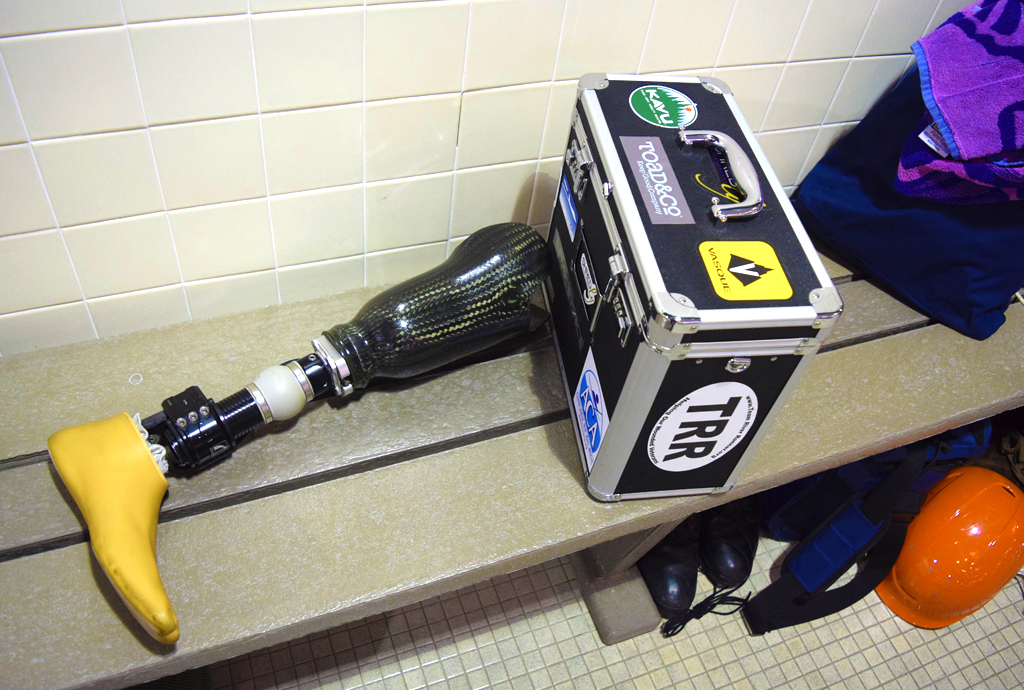 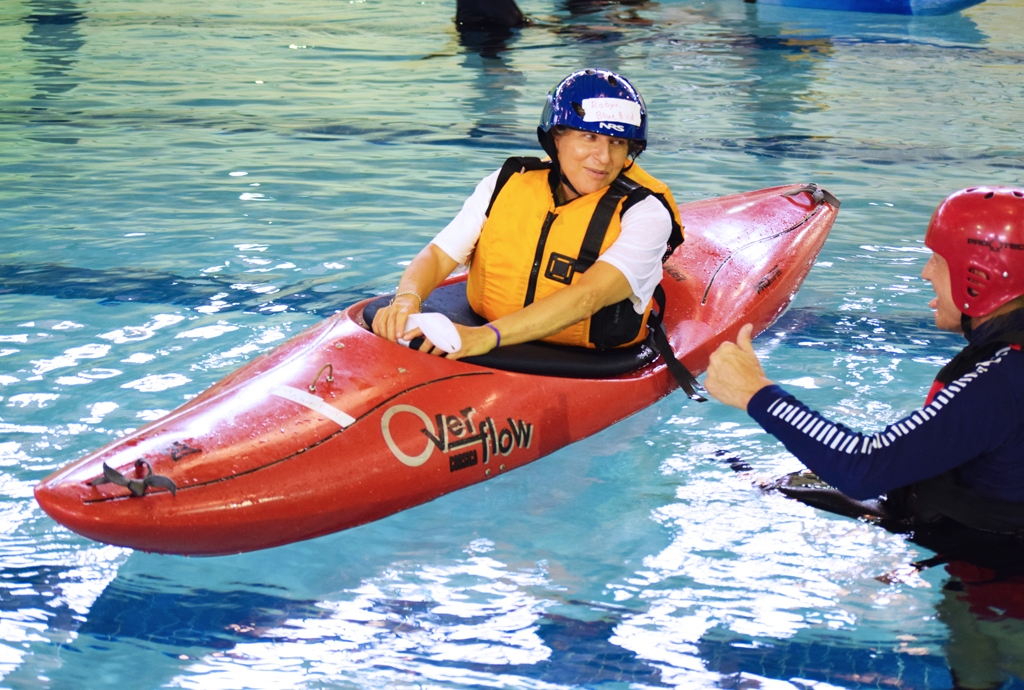 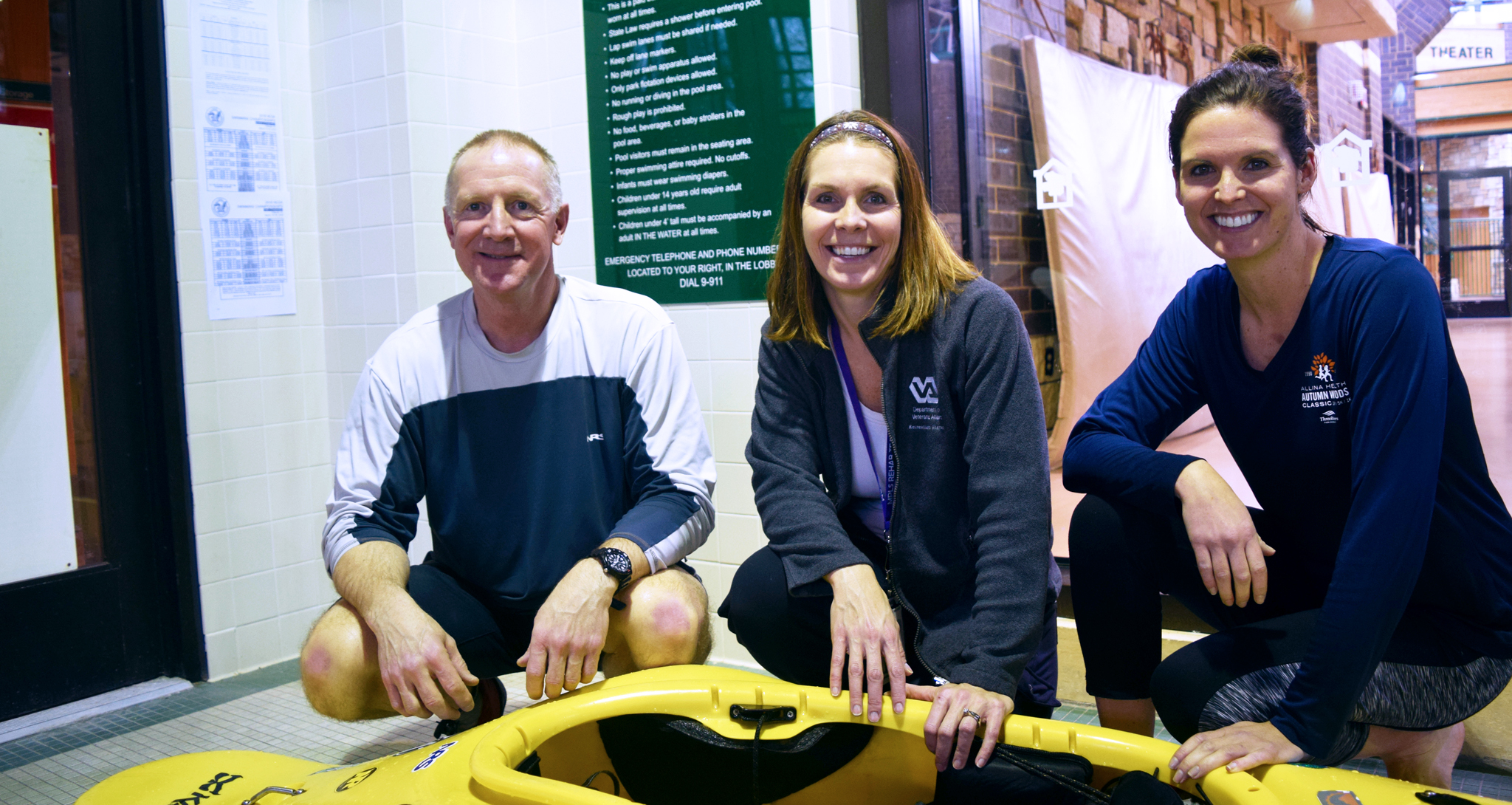 Since the VA launched its kayaking program with TRR-Mpls, Three Rivers Park District, and Edinborough Park, the initiative has served more than 80 vets.

Each has their own complicated story.

Take for instance, Erik Holmgren, the veteran with a prosthetic leg. Raised on a turkey farm in central Minnesota, Holmgren joined the military in 1989, at age 18. In 1991, during Desert Storm, he deployed to Saudi Arabia with a U.S. Air Force reconnaissance unit. While there, he fixed spy planes; he also developed vertigo and a hairline fracture in his left ankle.

Back in the United States, Holmgren’s vertigo worsened, and he was diagnosed with labyrinthitis: severe swelling of the inner ear. In an effort to fix it, doctors performed brain surgery on Holmgren, but it was unsuccessful and left him with hearing damage.

Meanwhile, a giant cell tumor was found in the place where Holmgren’s ankle fracture had been. It was benign, but it had devoured much of his ankle, and in 1994 and 1995 doctors operated, filling the empty space with bone cement.

“Over the years, it was crutches and canes,” Holmgren recalls. He suffered from depression and tried to take his own life in 1995. A stint at the Sister Kenny Rehabilitation Institute followed.

Later, when Holmgren left a sedentary desk job and became more active, his leg problems worsened; in July 2012, doctors recommended an amputation. It took him seven months to accept that he could either do what the VA recommended or “live with narcotics.” The amputation occurred on April 23, 2013.

Holmgren says that the next 12 months were “the hardest year of my life,” then pauses, reflecting on his time at the Sister Kenny Rehabilitation Institute. “That says a lot because I’d already been through a lot before,” he explains.

Since the amputation, Holmgren has continued to suffer from depression, but the Minneapolis VA has helped. And much of the VA’s benefit, according to Holmgren, is that he’s routinely exposed to other vets. “You have this immediate bond, this unspoken connection with other veterans,” Holmgren says, explaining that he often goes teary-eyed when he walks into the prosthetics department at the VA. He likens his reaction to “going home to your family.”

“You adapt,” Holmgren concludes. “You adapt to anything. But the only way you adapt is by getting out of the house.”

And so Holmgren has thrown himself out of the house again and again – sailing, taking part in research studies, becoming certified as one of the Minneapolis VA’s first “amputee peer visitors,” and now kayaking.

Today, at the pool in Edina, Holmgren and Kabitz practice how to right a capsized kayak. Kabitz has instructed Holmgren to pull the grab loop on his kayak spray skirt after he capsizes, but Holmgren forgets, and for a few tense moments he’s stuck upside down underwater. Then Kabitz rescues him, and they try again.

When Holmgren is successful the second time, everyone cheers.

Update: Holmgren is no longer using a partially deflated beach ball for stability. In February 2016, Kevin Carr from Creating Ability fit Holmgren with a prosthetic kayaking adaptation for his leg.

To learn more about the VA’s recreational programs, check out http://www.minneapolis.va.gov/services/recreation_therapy.asp

To learn more about Team River Runner-National, check out http://teamriverrunner.org

To learn more about Team River Runner – Minneapolis, check out https://www.facebook.com/pages/Team-River-Runner-Minneapolis/175473279137803 or contact Brian Jensen or Jodi Martinez at TRR-MINN@gmail.com

Erik Holmgren invites military veterans to reach him at his email address at 1704PRS@gmail.com 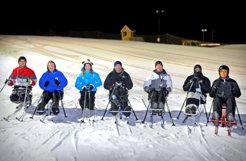