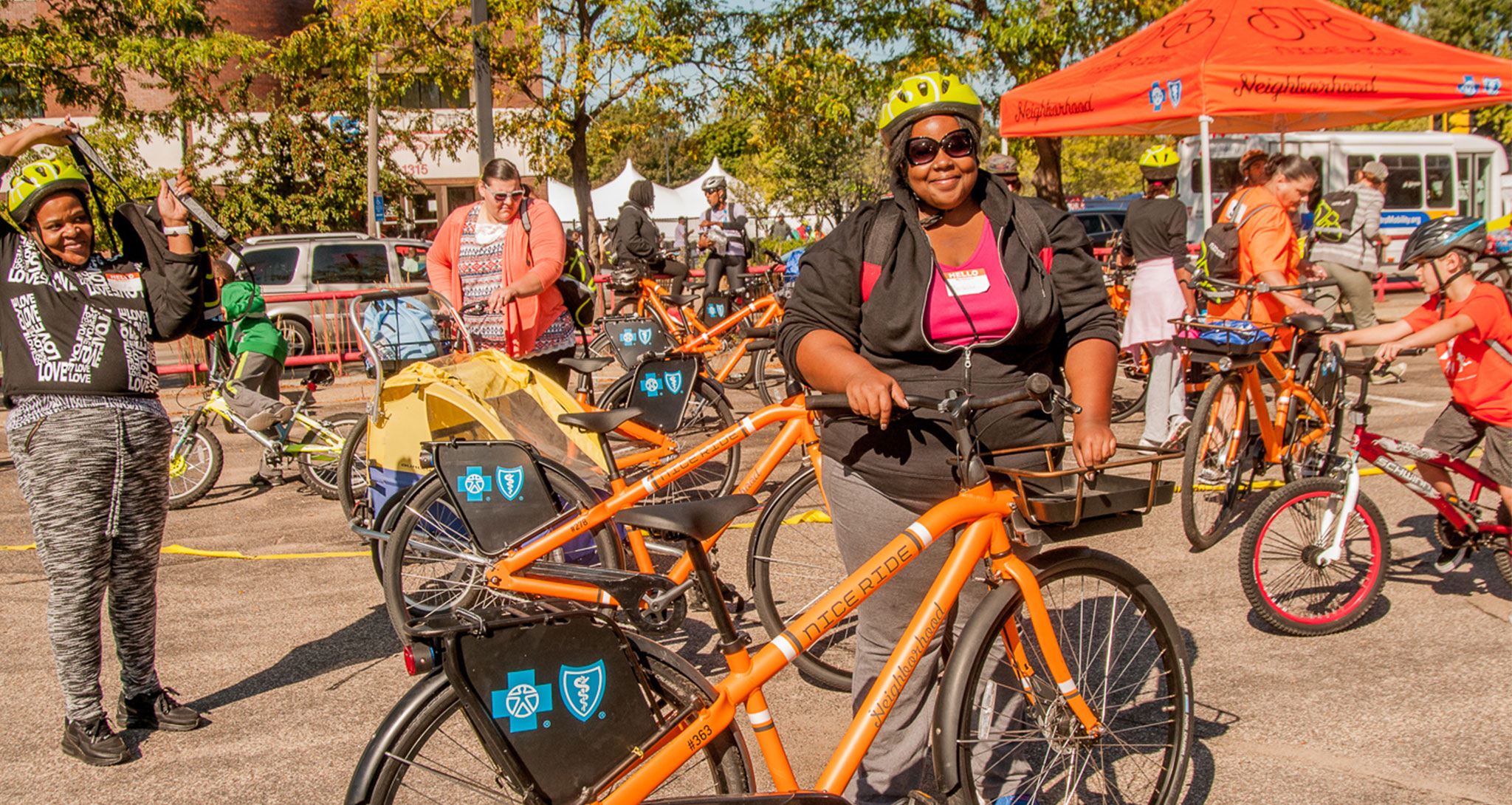 On a pristine September morning, Monsiou Dimerson and a cluster of cyclists leave NorthPoint Health and Wellness Center, cross Penn Avenue, and begin threading west through north Minneapolis. They’re a well-mixed bunch — young and old, ethnically diverse, and at varying levels of fitness. The orange bikes that most of them pedal resemble the green Nice Ride bikes seen around Minneapolis’ Chain of Lakes, but they’re sturdier and built for longer commutes.

The riders are members of Nice Ride’s “Neighborhood Program” — a.k.a. the “Orange Bike Program”— an initiative being piloted on Minneapolis’ North Side and in St. Paul’s Frogtown neighborhood to increase bike ridership and physical activity.

Biking is booming in the Twin Cities metro. Minneapolis alone boasts 200+ miles of bikeways — 117 “off-street” and 91 “on-street” — and has a robust bike share system to boot. The city has garnered numerous accolades for this infrastructure, most recently from the Copenhagenize Design Company, a Danish firm that publishes an annual index of bike-friendly cities. In 2015, Minneapolis ranked 18 in the world, the only American city to crack the top 20.

And yet, biking is not prevalent in Minneapolis’ North Side, Saint Paul’s Frogtown, and many other low-income, culturally diverse metro neighborhoods. Enter the “Orange Bike Program.”

Participants — currently limited to residents 18 years or older who live on Minneapolis’ North Side and in St. Paul’s Frogtown — are given an orange Nice Ride bike (and a helmet, lock and key) to keep at home for four months over the summer. If they log at least three rides per week, attend four community events, and return the bike and its accessories at the end of the season, they receive a $200 gift certificate to Venture North bike shop. They can use the certificate to upgrade an old bike or purchase a new one. 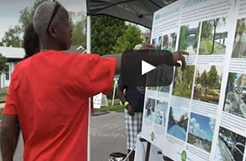 Watch this video about the north Minneapolis Greenway Project. 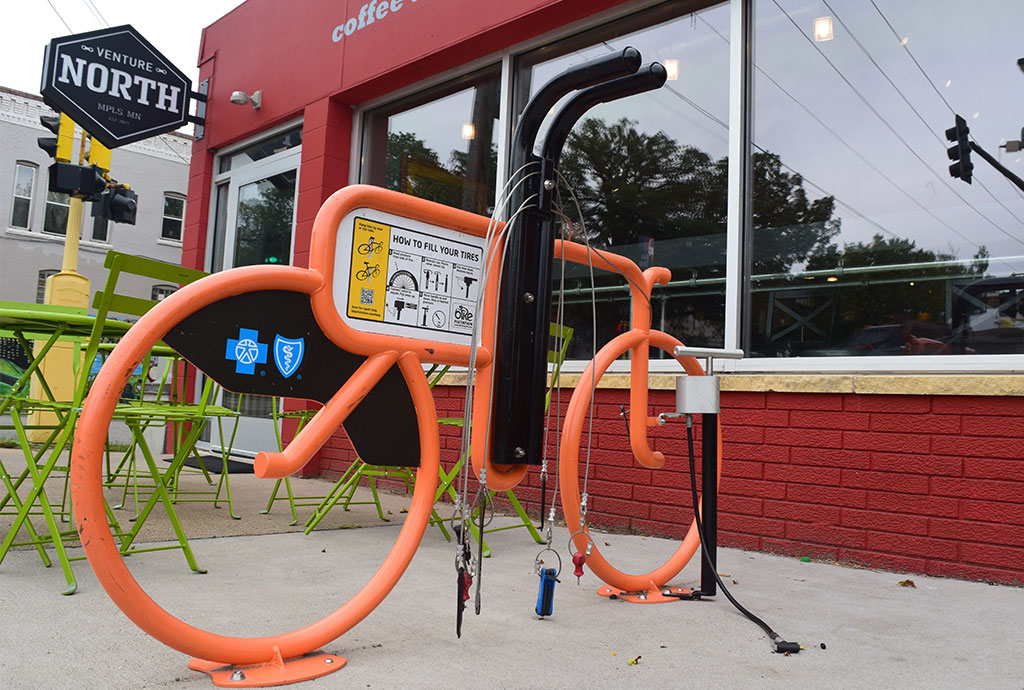 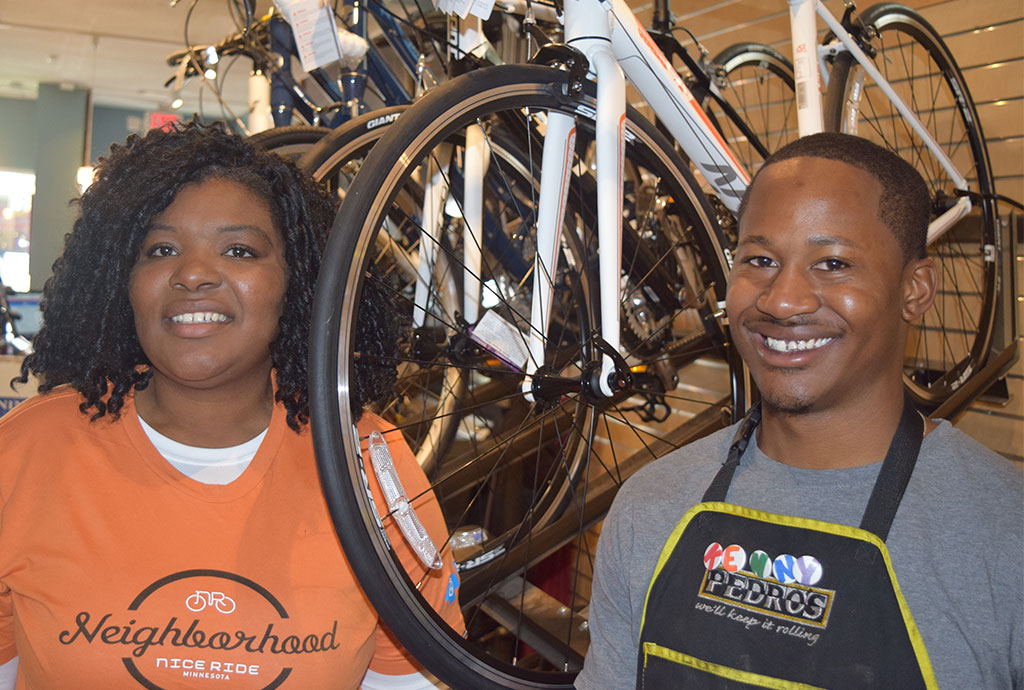 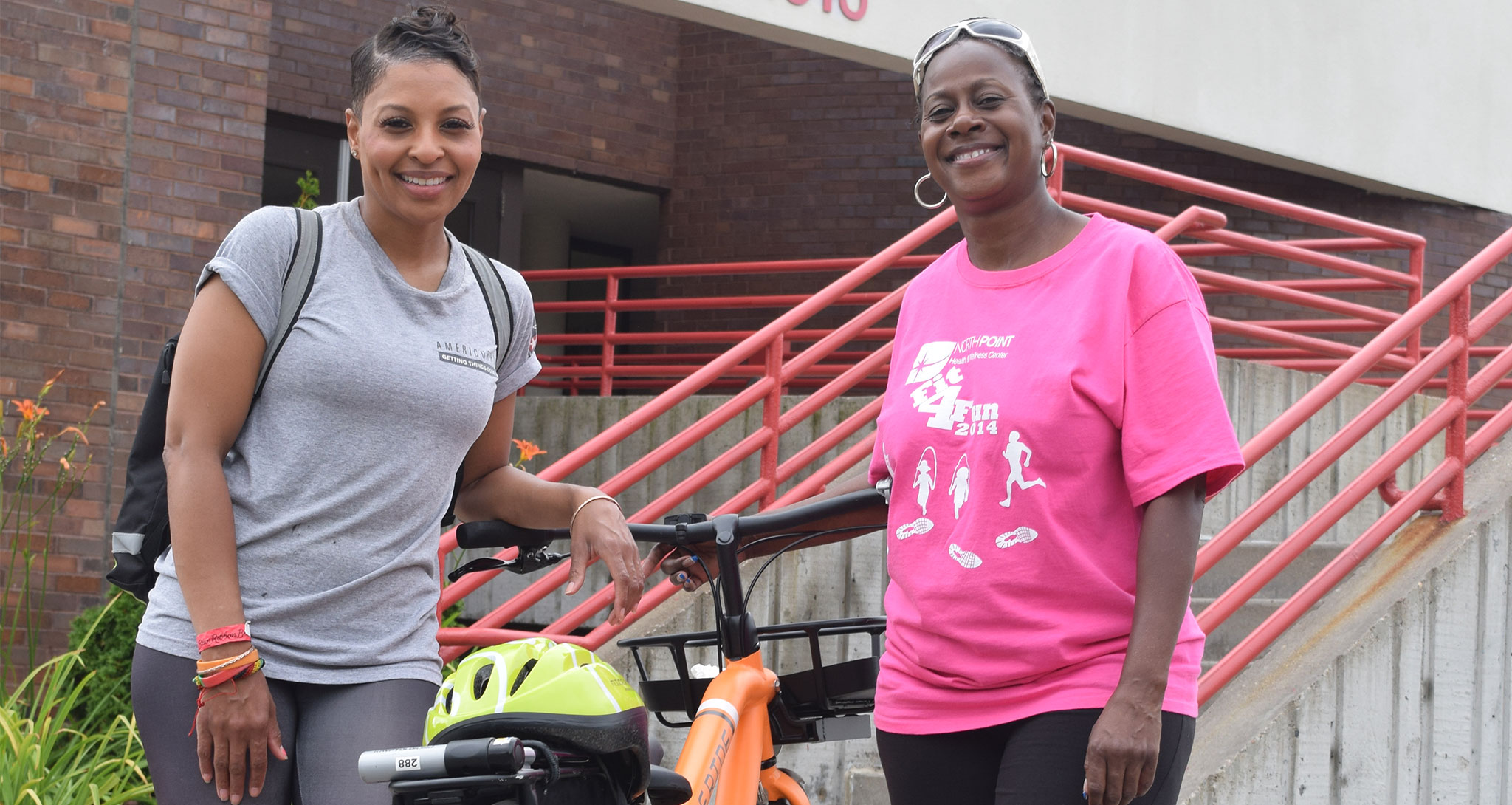 In north Minneapolis, the program is a collaboration between Nice Ride; NorthPoint Health and Wellness Center (a federally qualified health center where doctors write orange bike “prescriptions” for patients with diabetes and high blood pressure); Venture North (a full-service bike and coffee shop which repairs orange bikes free of charge); the Major Taylor Bicycling Club of Minnesota (a nonprofit working to increase bike participation for Twin Cities African Americans that facilitates group rides); and the Center for Prevention (which has provided financial support for the initiative).

Nice Ride and its collaborators believe that biking can impact more than just one’s midsection. It also has the potential to affect health, economic, and lifestyle disparities. Two years into the Orange Bike pilot program, anecdotal evidence supports such claims.

On that recent September morning, Kendrick Hall, a Venture North manager, pumps tires and adjusts seat posts for bikers before their ride. NorthPoint staff hand out bottled water and makes sure everyone is wearing a helmet. Louis Moore, President of the Major Taylor Bicycling Club, explains the route.

Monsiou Dimerson is there with her mother, who also has an orange bike. She says the program gave her the impetus to start exercising again and that it’s also given her opportunities to “see around the city” and spend time with friends and family.

Willie Daniels, another Orange Biker, weighed 250 to 260 pounds in early 2015 and his systolic blood pressure was in the “200-range.” After his NorthPoint physician approved his participation in the program, he committed to cycling three times a week. “There are times when you don’t feel like it,” Daniels admits, but participation paid off. He’s down to 195 pounds.

John Dee is 78-years-old. “[This program] forces us old people to get off our Archie Bunker chairs,” he says, chuckling. He’s gone on more than 50 rides this summer.

Although these success stories are promising, LaTrisha Vetaw believes it’s going to take more to make places like north Minneapolis and Frogtown bike-friendly. “The next step,” says the Orange Bike facilitator for NorthPoint, is “to build a coalition of people who are engaged around [bike] infrastructure” and willing to advocate for their neighborhoods on bodies like the Minneapolis Bicycle Coalition and The North Minneapolis Greenway Project.

Still, Vetaw is encouraged by the interest in the Orange Bike Program. In 2014, its inaugural year, 145 bikers participated in north Minneapolis and Frogtown. In 2015, it was 200. To register for 2016, send an email to Vetaw at lvetaw@northpointinc.org. 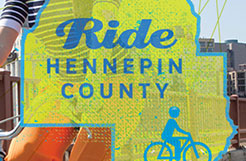 Hennepin County has an extensive network of bikeways.